As many you would know recurring income is widely regarded as the holy grail of business income streams. It’s pretty simple really, sell once, deliver on your promise and continue to earn revenue month after month. The best part about it all is that the Monthly Recurring Revenue (MRR) OR Annual Recurring Revenue continues to grow with each customer that you add. The end result can be a complete behemoth that enables you true freedom through guaranteed and predictable income.

In recent years a number of big businesses have switched their business models to recurring income methods; some of these include Adobe, Microsoft & Apple who’ve quickly realised the power of the model. The poster child of the model is none other than Netflix, who at time of publishing have 83 Million subscribers paying on a monthly basis.  Just imagine how much confidence this enormous and predictable income gives them to continue to innovate and dominate the market.

My Own Recurring Revenue Examples

Early on in my online business journey I made a number of major mistakes, by selling onetime products that required almost lifetime support & work from me. It wasn’t until I met James Schramko that I began to reposition my various businesses to a recurring model.

As of September 2016, I had the following subscription businesses listed in order of annual revenue

The best thing about recurring revenue streams is that they grow as you add in more customers. While its unrealistic to expect everyone to stick around all of the time, as long as your adding a greater amount of customers then you’re losing, your revenue will continue to grow. This is evidenced by my the members community, ConnectedPE that I launched in November of 2015, which has grown considerably since. 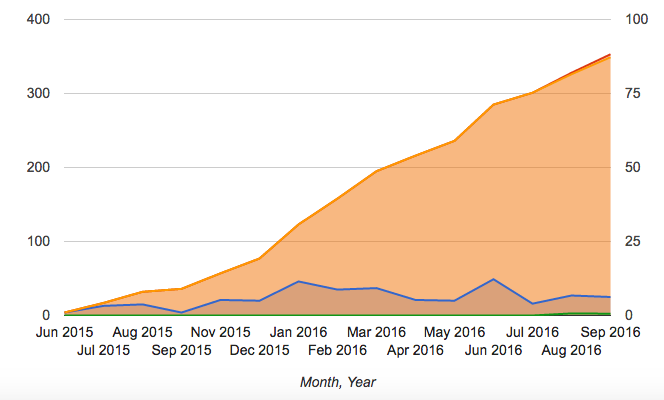 Currently access is charged at $139 USD per year with just over 300 paying customers, its quickly growing into the largest recurring business I have, and will only continue to grow long into 2017.

Could I add a new recurring stream?

During August of 2016, I started toying with the idea of building a new software solution for schools that would work with an annual subscription element. The software I had in mind would leverage the excitement and hype of the Pokemon Go release, albeit in more of education friendly scenario. The end result was ‘Monsuta Fitness‘, which at the time of publishing has been released using the popular pre sale means I’ve outlined numerous times on the blog.

The first step was to get people excited about the possibility of Monsuta Fitness through social media; a couple of quick posts quickly highlighted the interest people had for the solution; see below

While this was great, it would mean nothing unless people got their wallets out to purchase access. However we used this motion and hype to gear up for an actual pre release launch. As September rolled around I sent out an email explaining the product and providing people with a chance to lock in a 60% annual discount on the product for life, by simply pre ordering.

Following the first email, we had 32 fully paid recurring members to Monsuta Fitness. See below

These early bird adopters locked in access at $99 per year. The best part about this is that the 60% discount rate they received works to essentially lock them in for life, as by leaving they would be giving up the special rate they received.

The next step is to complete a series of scarcity driven emails that tie in with a price rise for annual access; the levels I’ve decided on are;

At each of these moments of price rise I earn the opportunity to make an offer to interested parties on my email list and social channels to get on board. The net result will be an even bigger snowball recurring business that grows into a great additional income stream.

Stay tuned for updates on the launch as they progress